October 8, 2021
by Bob Grant, L.P.C.
Whenever you hear the word “dependency,” most of us think in terms of some form of addiction or disease. It tends to imply something that should be avoided, fixed, or terminated. Most individuals with dependencies are those with addictive personalities and thus rely on others to meet their needs and fulfill their responsibilities. Not the type of person you want to be in a relationship with, or aspire to become.

What if I told you that making a man emotionally dependent on you was a good thing?

In fact, what if I could convince you that a man wants to be emotionally dependent on the woman of his choice?

As far-fetched as this might sound, I promise you that most men view a relationship with a woman as a prize. A woman has the ability to take away a man’s pain and make him feel powerful at the same time. In no other place can a man find such a combination in one package.

Being Feminine Has Its Advantages

When I am speaking with a client who asks me how they should act regarding a man they are interested in I say something like this…. “Imagine this man weighed 500 pounds and didn’t bathe. I mean really didn’t take a bath/shower more than once every month.

How would you act around him?” Some laugh. Others don’t say anything at first, but once they do respond, it is almost universal, “I wouldn’t care about his opinion, or impressing him, so I’d do whatever I wanted.” That is not to say that they would be rude or unfeeling, it simply means that they would not be worried about saying the wrong thing or behaving in a certain way in order to impress him.

This causes me to respond…. “Exactly – that’s why the men you are not interested in having a relationship with like you so much.”

Why Men Suddenly Pull Away

But what happens when it seems he’s already in love? And then…for no apparent reason – the passion starts to fade away. Suddenly she can feel the very life of the relationship slowly bleeding to death as she starts noticing… He doesn’t text as often.

He doesn’t want to talk on the phone as long as he once did. And he begins to hide things from her. When she ask him, “What’s wrong,” he quietly says… “I don’t know. Something is missing.” And then he says nothing else as she waits… and waits for him to explain… What he means… What they should do… What went wrong? Well, let me start by telling you that it’s not something you’re doing wrong. 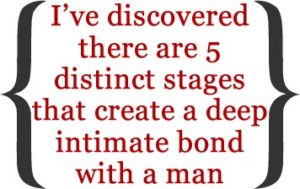 What most women don’t realize is there are 5 stages a man goes through emotionally to fall in love. When he pulls away it’s because he’s blocked at a certain stage of your relationship.

Often just helping get him unstuck not only rekindles his desire for you but can actually make it stronger than it was before! In fact, click here to learn more about the 5 Bonding phases so you can see where you’re at right now.