What Men Crave – His Deepest Desire In A Woman

Do you think you know what men crave more than anything else? If I ask most women this question, I’d likely get such responses as: 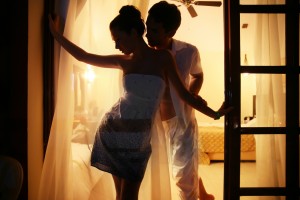 – Men want a woman who always agrees with him.

– Men crave a Sex Kitten – she always says yes to his request.

– All men want someone with the perfect body.

Men crave praise and admiration more than anything else.

I can’t emphasis this enough. Men are powerless to resist the woman who truly and wholeheartedly shows her admiration for him and what he does.

Now before I go further, let me tell you what this doesn’t mean. It isn’t as simple as just saying nice things to him. There is much more to it than that. Here are 3 key ingredients for making him powerless to resist you.

1) You must be a woman worthy of his admiration.

I’m not talking about being perfect, but you must demonstrate value. Does he feel lucky to have you in his life? Are you willing to disagree with him when he’s wrong and not back down? You are the one who determines your value, not him.

If you’re not doing these things, then he won’t take your compliments very seriously. You need to be a woman he admires so that your praise means a great deal to him.

2) You must understand what he likes about himself.

Do you know how he sees himself?
Does he think he’s a good athlete or a wonderful businessman? This is critical because these qualities mean a lot to him. Praising him for something he values makes him feel that you truly understand him. Praising him for things you like alone will have little impact.

3) Don’t keep your thoughts to yourself.

When you see him doing something you admire, speak up. You don’t have to pretend you admire something about him that you really don’t. Instead, don’t hold back when he does something impressive. Let him know how amazing he is!

He may try and minimize your compliment and if he does I want you to do the same thing I do with a client when they try and deflect a compliment:

Here’s why it works. Deep down he’s hoping you really mean it. He’s just afraid to trust it. When you follow up with the statement I’ve suggested he won’t just hear it…he’ll feel it. At that moment you will stand out from every other woman he’s ever met because you’ve given him the type of praise he secretly craves.

What most women don’t realize is that what makes a man want to get close to you is often different than what you think will work. 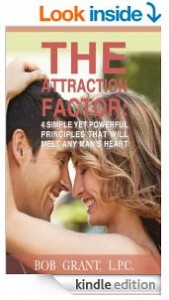 In this quick and yet powerful kindle eBook, you’re going to learn the 4 factors (or secret ingredients) that when you practice them consistently, touch a man’s heart in a way that most women simply can’t believe.
These 4 simple principles have proven to be effective again and again and work on almost any man.

Inside I’ll show you:

* Why the being curious can make a man bond with you quicker than anything else.

* The one question you should ask yourself that will show you how men really see you.

* The difference between being just pretty and the ability to make a man intensely attracted to you.

* Why you should focus on a great guy, not on making one particular guy great.

When you follow these easy guidelines you’ll notice how men begin to see you as softer and more feminine. Instead of having to focus on being “perfect” you’ll soon see how being yourself is actually much more appealing.

And much, much more. You get all of this for less than you’d pay for a cup of coffee at Starbucks.