Don’t Ignore Him – Rotate Him

February 1, 2016
by Tatia Dee
Are you having arguments with your man? Are you finding yourself regularly angry or upset with him? Is he acting distant? Has he stopped calling or spending time with you? Are you ready to give him an ultimatum and kick him to the curb if he doesn’t act right?

The places in this guide are virtually unknown!

Don’t do anything you’re thinking of doing.

Don’t Break Up With Him,

Don’t Give Him The Silent Treatment and 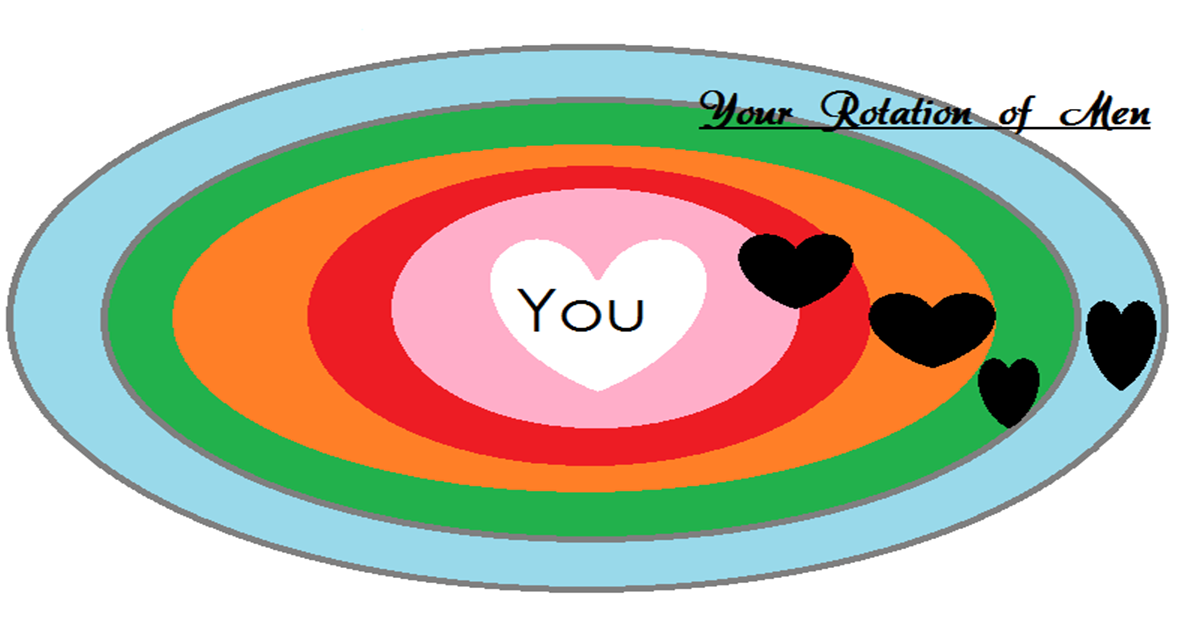 Move him further out of your circle.

When you “rotate” a man further out in your circle, it means that you change the level of interaction you have with him. All of the men who you interact with make up your “rotation of men.”

This means that instead of always being available to see him or speak to him when he reaches out to you, you’re going to keep your own schedule with other fun activities. This means that you’re not glued to your phone to take his every call and you’re not changing your schedule to fit him in at the last minute anymore.

IF YOU’RE IN A RELATIONSHIP:

Instead of making your plans around him coming by at a particular time, you’re going to make a backup plan so that if he’s not there by a certain time, you’re off and into whatever enjoyable activity you’ve planned without him.

Either way, you’re moving him further and further away from the center of your circle.

This I how it works:

AT THE CENTER IS YOU

Picture yourself at the center of a circle. The circle has four rings in it, one ring closest to you at the center, and the other three rings progressively moving further out away from the center.

The most inner ring is where a man you’re intimate with reaches you. Whether it’s holding hands, kissing, hugging or even more intimate, this is the closest a man can get in your circle.

SPENDING TIME WITH YOU

The next ring is where any man you spend time with reaches you. Whether it’s at home, at work, socially or recreationally. This level of interaction is the second closest level a man can get in your circle.

The third ring is where any man who’s interested in you and wants to communicate with you reaches you. Whether it’s via phone, email, social media, online dating or just approaching you and starting a conversation, this is the level of interaction where a man makes initial contact with you.

The outer ring of your rotation is made up of men who notice you. What makes this level of your rotation different from outside of the circle is that these are men who are openly interested in you.

MEN OUTSIDE OF YOUR CIRCLE

Outside of the circle and beyond the four rings are men who you casually interact with out in the world and in your day to day activities.

ROTATING A MAN FURTHER OUT OF YOUR CIRCLE

Rotating a man further out of your circle means that when a man leaves, disappears or stops calling, you’re not calling him, texting him, preparing a “closure” speech about how he’s hurting you, or declaring to him that it’s over.

Instead, you’re accepting his lack of contact as proof that he doesn’t belong in the inner levels of your circle!!

Therefore, rather than sitting around brooding about missing him or being apart, this approach allows you the opportunity to notice the other men who are interesting in you. This is a lot more fun than being stuck on any one man who’s no longer maintaining his original position in your rotation.

FOUR EASY STEPS TO INTERACTING WITH MEN IN YOUR ROTATION

Easing your way into interacting with the men in your rotation is about starting small and taking baby steps.

The first step starts at the center of your circle

This means making sure you’re taking good care of yourself. You want to keep your focus on yourself and what you enjoy. Indulge yourself. This is a great time to embrace the unique experience of being a woman in her feminine glory. Remember, radiance shines from the inside.

The second step involves the most outer ring of your circle where you’re noticing the men who are noticing you.

This applies to when you go to the supermarket, the cleaners, the mall and even when you’re commuting to work.

This step isn’t about flirting. It’s only about noticing, and feeling your response to the attention of the men noticing you.

Allow yourself to develop a pattern of softly and graciously receiving this attention.

The third step involves the next inner ring of your circle

This is where you interact with men who are interested in you and communicating with you.

This step is about being in your feminine instead of your masculine.

This is when you’re leaning back and receiving.

You’re letting a man show his interest in you. And if you’re interested in him, just smile, hold eye contact for at least 3-5 seconds and then look away.

Let him approach you and ask for your number. When he calls you, keep the conversation short (no more than 15 minutes because you want to get to know each other face-to-face, not over the phone).

The fourth step involves spending time with a man.

This isn’t always going out on a date because spending time with a man is about experiencing the moments together while keeping your focus on yourself and your feelings in his presence.

So you see, ANY man who’s noticing you, interested in you, spending time with you or intimate with you is in your Rotation.

The most important part of this approach is your being open to receive the attention of any man at any level of interaction as long as you’re comfortable with it. That’s because YOU get to decide what level of interaction to have with any man in your Rotation. And you decide when to allow him to move closer towards your center, or to rotate him further out of your circle.

How Do I Get Him Back? Before He Moves On

Not every breakup means the end forever. If there’s any chance of restoring the relationship, we can help show you how to get him back.

How To Attract The Man of Your Dreams: He’ll Finally Be Able To Find You

Sometimes you have everything you need for the perfect relationship… except the perfect guy. Let us help you find the man of your dreams.

Your Last First Date: He’ll Be Begging To See You Again

What if you could draw him in the fastest at the very beginning of the relationship? Start your romance off on the best footing with a strong first date allure.

Taming The Bad Boy: Put Him Under Your Spell

If the man you’re in love with is a challenging bad boy, then you have to learn the rules for what is effective (and ineffective) when dealing with a more difficult type of man.

Commitment Soup: One Taste And He’s Yours Forever

His ability to commit is based on his character and how you make him feel. Learn about the levels of commitment and what you can do to guide the relationship to become deeper and stronger.

About The Author – Tatia Dee

Tatia Dee is a Life & Relationship Coach with a practice focused on helping women achieve the love and life they want in a quick, powerful, and successful way. You can learn more about Tatia on her website here.